Amendments to the Supreme Court Act passed bythe Polish Parliament in November should be viewed as a first step in the rightdirection, but they manage to address only a quarter of the Commission’s fullrecommendations on the rule of law situation in Poland. Resolving thesecontradictions will require political goodwill and decisive action.

Relations between the EU and Poland, as well as the latter’s long-term position and goals within the Union, were the main subject of a meeting between participants of in.europa Academy and Ambassador Marek Prawda, Director of the European Commission Representation Office in Poland and former Permanent Representative of Poland to the EU (2012-2016).

The meeting started with a short summary of the most recent developments in the three-years-long dispute on the rule of law and judicial reform in Poland. Ambassador Prawda has indicated that, although amending the new laws regulating the Polish Supreme Court is a welcome first step, the road to full compliance with the recommendations remains long.

Ambassador further addressed the issue of political fallout resulting from the dispute, the prime example of which are the negotiations on 2021-2027 EU budget, described by M. Prawda as “crisis management budget’, as opposed to the 2014-2020 convergence-oriented budget. It was pointed out that, in previous budgetary negotiations, Poland was viewed as the leader of a “cohesion-friendly” bloc of states interested in supporting cohesion policy and reducing development gaps between EU member states. Poland owed this position to its responsible management of the EU funding and its ability to combine democratization with economic growth. This positive image was eclipsed by the rule of law debate, which in turn limited Poland’s role in shaping European agenda.

Ambassador Prawda addressed participants’ questions regarding career paths in the EU institutions and discussed issues of accessibility thereof to Polish candidates, as well as possible systemic solutions that might be introduced to better prepare Poles for EPSO exams. Underrepresentation of Poles in the higher echelons of power was identified as an important hindrance to furthering Polish agenda within the Union.

The meeting was concluded with several remarks on the current identity debate within the European Union. Little enthusiasm can currently be seen for federalist agenda, instead the model of integration proposed by the current Commission focuses on cohesion and inclusiveness of the process. Still, ambassador Prawda stressed the importance of multilateral cooperation and European sovereignty as the best guarantees of national sovereignty in the world faced with multiple challenges, stemming i.a. from emergence of multinational corporations. The future of European integration will ultimately be determined by the next generations’ ability to create innovative solutions to match these modern challenges.

The person responsible for moderating the meeting and preparing the abovementioned summary was Maciej Lipiński, participant of the in.europa Academy 2018.

In.europa Academy is as an educative initiative of the in.europa Institute, POLITYKA, Konrad Adenauer Stiftung with the support of the Erasmus+ Programme of the European Union.

The European Commission Representation Office in Poland has the patronage on the Academy in.europa. 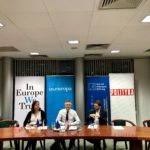 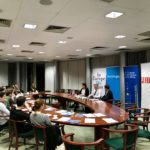 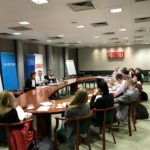