The transatlantic relations have never been in such a poor condition as they are now. Therefore Europe – confronted with belligerent rhetoric of president Donald Trump – has to redefine its position in the international sphere. It will not be an easy task, however, as the world, in which Europe can no longer count on unconditional American security guarantees, is taking a very different shape from the one we know today.

The in.europa Academy meeting with Ryszard Schnepf – a former ambassador to Spain and the United States – was dedicated to the challenges for Poland and Europe in their uneasy relationship with the US. The Ambassador began with a short recollection of the late president George H. W. Bush, who died on November 30, and his efforts for Poland’s well-being after 1989. Bush’s visit to Poland as vice president was mentioned in the context of hopes it had incited at that time. Also his role – as president – in the reduction of Poland’s debt was underscored.

Next, Ambassador Schnepf moved on to discuss contemporary transatlantic relations. Despite Trump’s condescending view of the EU and NATO, which worries many experts, our expert thinks that “this attitude is only temporary in American politics”, as Washington needs allies. And what region has shown better understanding of American interests than Europe?

Then, the discussion turned to the possibility of permanent US military bases in Poland. As has been underscored by the Ambassador, the US no longer wants to allocate its resources in our region for an indefinite period of time, as it prefers to act more on an ad hoc basis. Washington’s attention is increasingly turning towards East Asia and Pacific, where its interests are threatened by China. That’s why, according to our expert, a gradual increase of American military engagement in our region – which remains priority for Poland’s government – is very unlikely.

Moving to American domestic scene, Ambassador Schnepf touched upon the scenario, in which the Democrats strive to impeach president Trump. He considered it to be unlikely, given a possible public backlash against such a move. Additionally – according to our guest – that would significantly diminish the Democrats’ chances in the 2020 presidential elections. At the same time, Trump’s approval ratings remain at relatively safe level, the fact that betokens fierce political rivalry in the 2020 contest.

The participants also posed questions about the future of the US-China rivalry and about a paradoxically positive impact Trump may have on European integration.

The meeting ended with the discussion on the socio-political polarization in the US and the possible ways of overcoming the existing divisions. To be sure, these issues require a profound reflection. And according to the Ambassador, younger generations will not be in position to simply brush them aside, since the shape of the future world will depend on their attitude towards such complex challenges as climate change, or the rise of an artificial intelligence.

The person responsible for moderating the meeting and preparing the abovementioned summary was Łukasz Gadzała, participant of the in.europa Academy 2018.

In.europa Academy is an educative initiative of the in.europa Institute, POLITYKA, Konrad Adenauer Stiftung and co-founded by the
Erasmus+ Programme of the European Union.

The European Commission Representation Office in Poland has the patronage on the Academy in.europa. 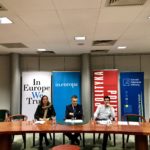 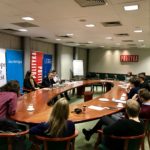 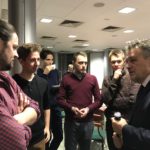