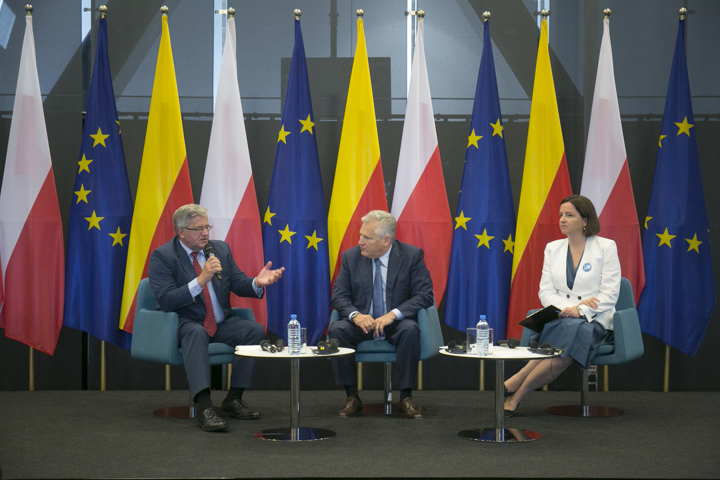 New energy for the European Union

“We have to readopt a pro-European stance and abandon Euroscepticism based on Polish fundamentalism, as this is a road leading to marginalisation within the European Union”, said Aleksander Kwaśniewski. Poland’s position in the European Union is “extremely limited – of the volition of the current authorities”, Bronisław Komorowski warned.

On Wednesday, both ex-presidents participated in a conference celebrating Europe Day held on 9 May organised in the Copernicus Science Centre in Warsaw by the In.Europa Institute. Other conference participants included: Thierry Chopin – Director of the Schumann Foundation, Pat Cox – ex-President of the European Parliament, Róża Thun – member of the European Parliament representing the Civic Platform (Platforma Obywatelska) party, and Adam Bodnar – Polish Commissioner for Human Rights.

“ We are meeting on Europe Day – on 9 May Robert Schuman announced his declaration changing Europe and – subsequently – also the world. Schuman believed that one day Poland would also become part of the European plan. Today, we are members of the European Union and we can shape Europe together, but we are not so active as we should be. That is why we established the In.Europa institute a year ago – because we believe that Poland is an important part of the European project and we want to develop it for future generations”, said Anna Radwan, founder of the Institute.

“Poland’s economic, social, political and military potential may allow this country to play a major role again – however, this necessitates changing our position in the international arena and a completely different approach to the European Union”, said Bronisław Komorowski during a panel discussion entitled Europe: challenges and trends.

Bronisław Komorowski emphasised in his speech that Poland’s position in the European Union was “extremely limited – of the volition of the current authorities”.

“Poland’s central government has assumed the position of a boxer struggling to defend himself, using blocks and avoiding punches, but offering nothing, having no counter attacking tactics up his sleeve and not even trying to influence Europe’s policy”, – said Komorowski.

He also said that “human, economic and – currently- also political and military potential predisposes Poland to reclaim a role matching its potential and ambitions, as well as its diligence.

This requires changing Poland’s internal policies, as well as its foreign policy in the European and international arena, but this is perfectly feasible”, said Komorowski. He added: “Politicians governing our country should be replaced. There is no other option”, he said. 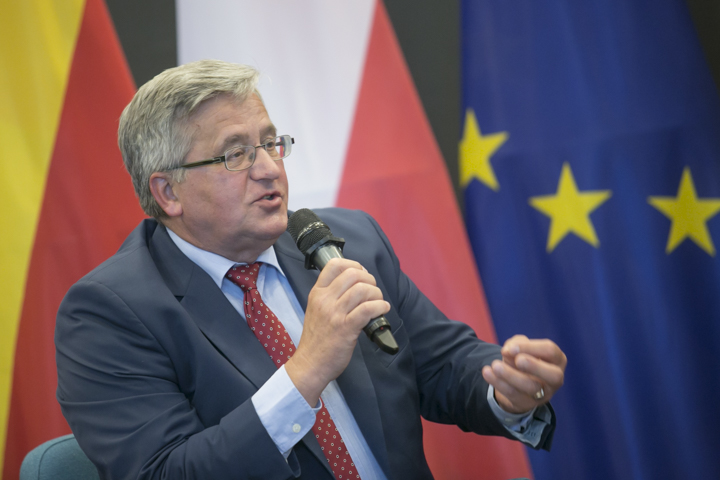 There were also calls for Poland joining the eurozone because only then would the country be able to start playing any role in the future.

In his opinion, Poland has to readopt a pro-European stance, because Euroscepticism is – at best – a road leading to marginalisation within the European Union.

“The European motive concerning our position in Europe will be one of the leading themes of the Parliamentary election debate as this is our Polish “to be or not to be”, said Kwaśniewski quoting Shakespeare.

“I do not believe in long-term projects advocated by certain Law and Justice (Prawo i Sprawiedliwość) party leaders, so let’s readopt a pro-European stance. The damage that has been done so far will necessitate a long period of recovery”, he said.

In the opinion of the ex-President, “the worst thing is that confidence in Poland, even in its pro-European stance, is dented to such an extent that even very pro-European governments to come will have to work hard to restore this confidence”. 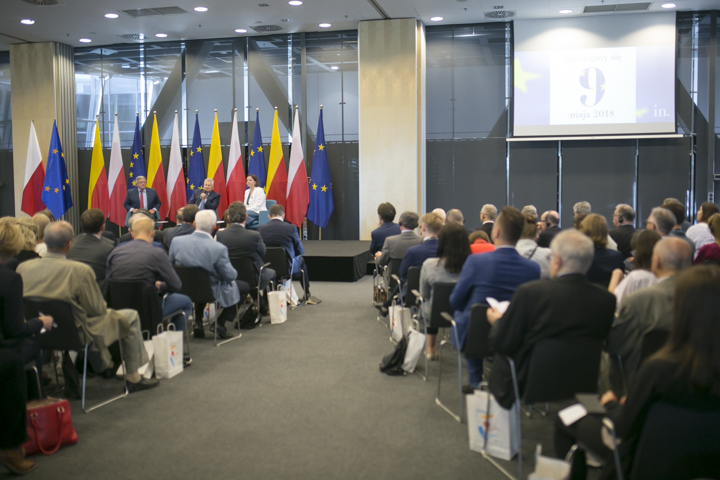 He also called upon pro-European groups to be more active.

“Firstly, we have to realise that the situation is difficult, that the Union and European integration are facing threats from various sources and that it has to be defended, and if this is to be effective we have to find strong arguments and involve people”, he said.

Hanna Gronkiewicz-Waltz, President of the City of Warsaw, emphasised that Poland’s position in the European Union “has deteriorated”.

“I am filled with anger and sadness as once we were a nation epitomising the love of freedom and democracy, but now in Europe’s opinion we have become tricksters who only want to squeeze money out of the European Union without respecting its fundamental values”, the President of Warsaw said.

According to her, the Law and Justice government “is trampling on those values by dismantling the justice system”. She added that the government’s policy “under the motto of Poland getting up off its knees is leading to diminishing the role of our country in Europe.

Further consent to the government discrediting Poland means the deterioration of a situation that is already bad”, said Gronkiewicz-Waltz. 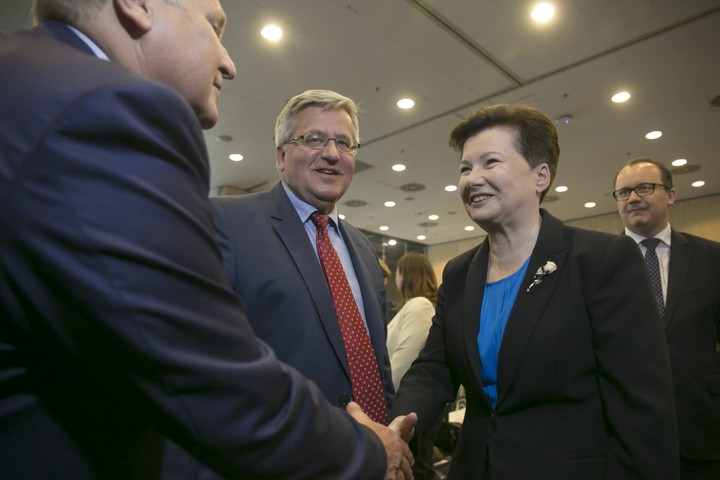 Conclusions from the debate on Poland’s changing role within the European Union and on what is indispensable for the dynamic development of Poland and the EU? First of all, on the one hand, there is a need for more practical and information-oriented measures on the part of the EU, which would involve citizens. On the other hand, it is of paramount importance to hold discussions focussing on values and to remind about them constantly – the European Union is not only an economic entity, but also a community of values.

In the opinion of those participating in the panel discussion, the European Union needs a practical approach and direct actions, and responsibility for its development should be assumed by individual countries and citizens. Populist tendencies and actions by extreme political groups are hard, but not impossible to combat – Austria and France are obvious examples.

During a panel discussion entitled Where is the heart of European democracy? its participants stressed the importance of a close dialogue focussing on values, such as the rule of law, which is fundamental to the European Union. It is important to keep on talking – but in a way that will get the message across to EU citizens. 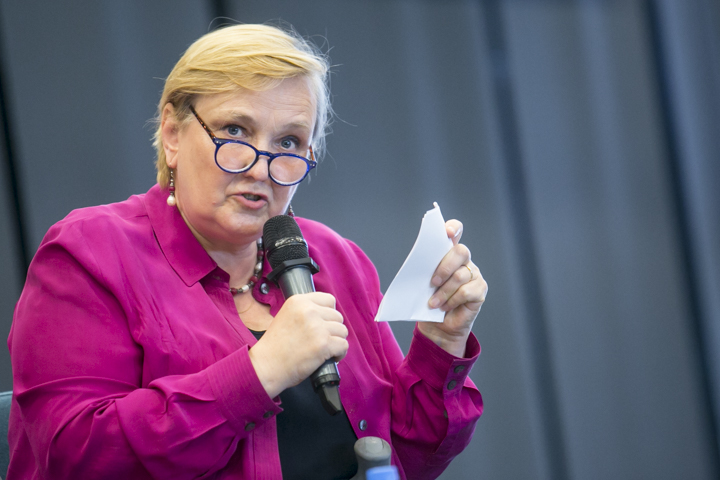 We need vigorous action! Digitalisation is an accomplished fact, the world is moving so fast, we have to look for new sources of EU energy – and look for it in citizens’ actions. We need to have the courage to shake up the debate that we are holding. But the European institutions cannot get to each district by themselves! It is the governments and public media that should provide citizens with information on the role of the European Union; we are here only as a proxy, this debate should be moderated by the government”, – said Eurodeputy Róża Thun. 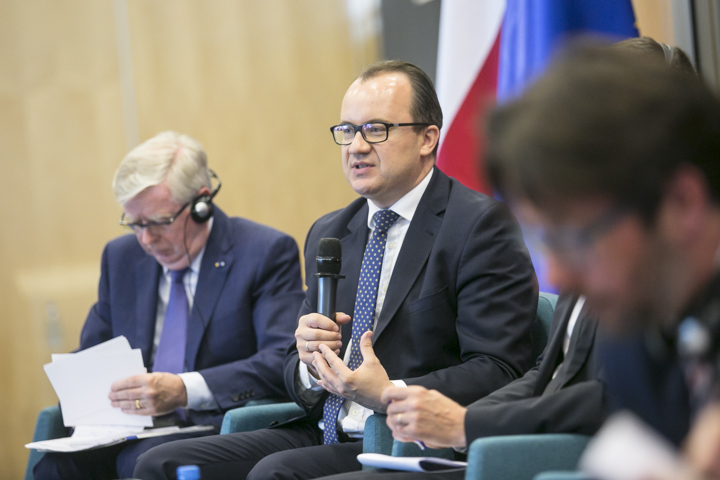 “ The future of Europe is not an abstract term but an issue of paramount importance. As Europeans we have to remember that we account for only 7% of global population but we own almost a quarter of global wealth. If we, the European Union, divide into 27 parts – we will have no influence on what is happening globally – said Pat Cox, President of the European Parliament in 2002-2004.

Adam Bodnar, Polish Commissioner for Human Rights: A debate on the rule of law in Poland should have taken place in mid-2016. Now the clock is ticking. PiS’s latest tweaks to judiciary laws are merely cosmetic.

What Poland lacks is relating the debate to human rights. We are discussing the GDPR from the perspective of risks, but we have forgotten that this is aimed at strengthening civic rights – said the commissioner. 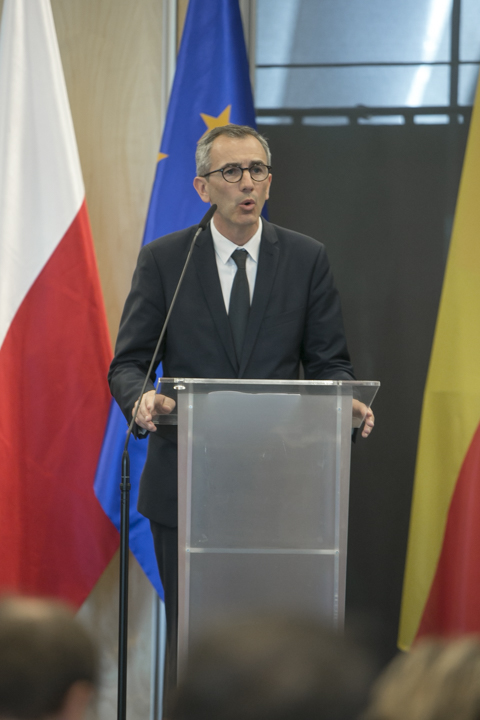 Background information about the conference

The conference fits in certain political context. Some crisis situations are gone – the Eurozone crisis, migrant crisis, Brexit and terrorist attacks. There are certain consequences that result from this, especially from the attacks on liberal democracy. The question which has brought us here together, the one relating to democracy and its essence within the European Union, is of particular importance at the time of this conference. Therefore, this meeting seeks – albeit to a modest degree – to encourage profound reflection on the nature of democracy, its development and the role that the European Parliament plays. These questions are of special importance ahead of the elections to the European Parliament. Our reflection will be fuelled by a discussion held by eminent politicians who will elaborate on this perspective and on the future of the European Union. I would like to give my heartfelt thanks to the presidents, Mr. Aleksander Kwaśniewski and Bronisław Komorowski,  for agreeing to participate in the discussion. I also want to thank Mr. Pat Cox, ex-President of the European Parliament, and Ms. Róża Thun. Experts coming from academic circles and those representing civil society will also contribute to the debate. I am also grateful for their willingness to become involved in the deliberation.

In conclusion, I would like to emphasise the significance of the day on which the conference is convened. The ninth of May is a momentous date, as this is the day marking the Schuman Declaration and on this day we celebrate the glorious legacy of the European construction, which is a guarantor of peace and conciliation between our countries and a level of welfare that has never been reached before. I believe that this legacy should be celebrated, the more so that we have to protect it, as it is endangered. I do not want to sound pessimistic, but the challenges and crisis situations that we have faced as Europeans necessitate re-evaluating our reflection on a united Europe. This unity is indispensable to confront future challenges. We are aware of the fact that this unity cannot be taken for granted. Political tensions seem to be threats to the unity and stability of the European Union. It is obvious that political pressures in any part of Europe endanger cohesion. Populist parties are trying to use this fragility and postulate closing off, which may be pernicious. And it is in this particular context that the significance of today’s conference is becoming obvious. We hope that the discussion will contribute to finding solutions, which will bring us closer to the development of a united Europe.

The idea of Robert Schuman

Common European interest is the main idea of the founding fathers. We want this legacy to be relevant and I believe it still is. If we look at security, we can see that we all share a common interest. Moreover, we are going together through the migration and financial crisis. Solutions adopted at national level are not sufficient to confront the challenges that await us. Action should be taken at European level. Efforts taken at the national and European levels should be combined.

The second legacy means working within the common market and securing common interests.

The third legacy means Europe’s internal cooperation in economic matters. This will give Europe greater awareness. 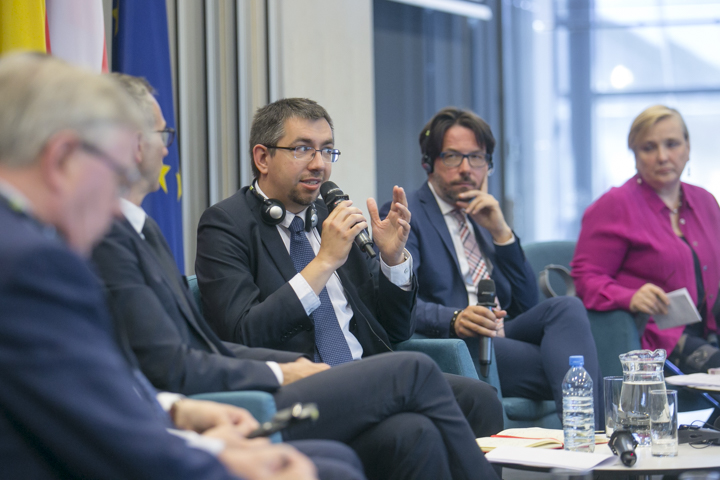 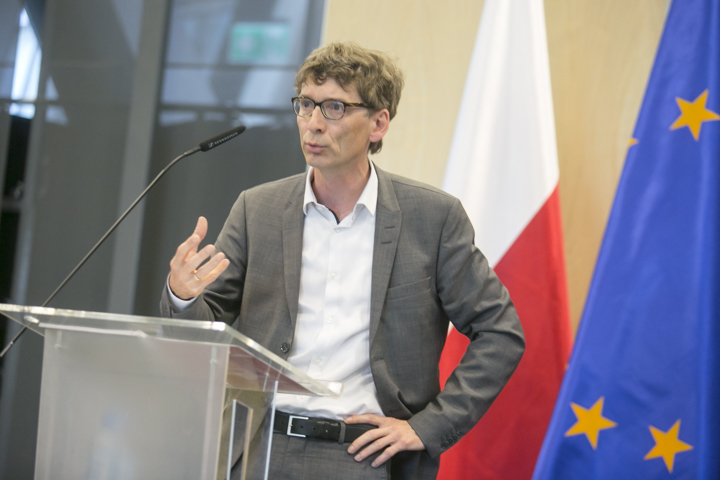 Let me start with two quotations:

The European construction has reached a critical point in its development and if we do not succeed in finding a solution and stopping this development, Europe will be on a collision course with what was decided in Maastricht and it will be reduced to mere economic aspects. It will be an area offering freedom of movement to people and goods, but providing no means to solve the problems of citizens facing external threats.

One of the main reasons for this analysis is growing nationalism practically in all Member States,  and it is a result of fearing the processes that are currently occurring in our civilisation. By that I mean migration. These are fears requiring not so much finding a solution, but giving some consideration to the previous system, which means nation states.

This quote dates back to 1994, so it is not new, which is quite surprising. It comes from Germany, and we are all aware of the important role the country played in European integration. These words were said before EU enlargement and before numerous crisis situations within the European Union, which have led to diminished confidence in political decision makers.

We can increase citizens’ confidence in the European Union and boost cohesion within the EU by: 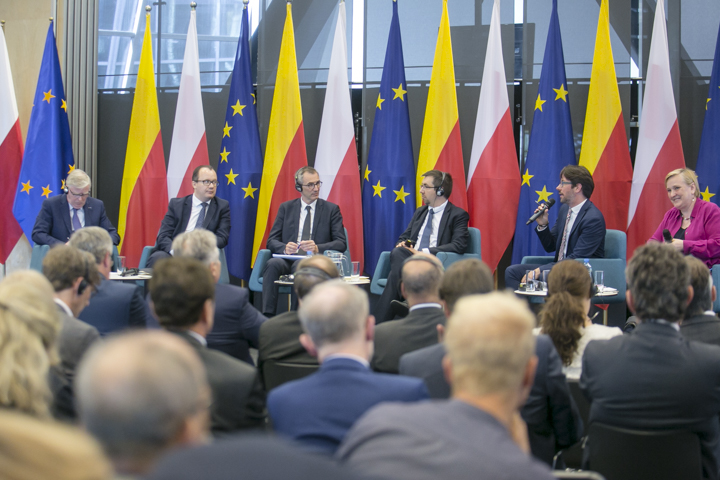